Could the PRO Act Cause You to Lose Your Freelance Work?

Have you ever seen freelance job postings that said independent contractors in certain states, such as California and Massachusetts, shouldn't apply?

That’s because those states use something called the ABC Test, which determines if a person qualifies as an independent contractor. If you can’t pass all three prongs of the test, you would be classified as an employee. Many companies would prefer not to work with freelancers in those states rather than risk the potential fines and other legal ramifications of potentially misinterpreting the test.

If you think this doesn’t affect you because you don’t live in one of those states, brace yourself: The ABC Test is poised to seep into national law.

The ABC Test is poised to seep into national law.

When California’s Assembly Bill 5 (AB5) codified the ABC Test into law last year, it wreaked havoc for thousands of freelancers who suddenly lost work. AB5’s sponsors asserted that the ABC Test would help prevent misclassification, and they predicted that businesses would hire independent contractors as W2 employees. But that didn’t happen. Instead, Vox severed ties with hundreds of California freelancers, and other companies began blacklisting freelancers from the state.

Backed by labor unions (which can’t legally organize independent contractors), AB5’s sponsors were targeting app-based rideshare drivers. But the law cast such a wide net, tens of thousands of freelancers were affected. Last year, a cleanup bill exempted more than 100 professions with some, including freelance writers and press photographers, suing the state in federal court. Then last fall, California voters passed Proposition 22, which allowed app-based drivers to remain independent contractors. For many California freelancers today, the confusion and blacklisting continue.

What is the ABC test?

That ABC Test now appears in federal legislation called Protect the Right to Organize Act, or PRO Act. Its three prongs are the same as those in AB5:

It’s the B prong that affects many freelancers, because it says you cannot be in the same line of business as the hiring entity. What does that mean? Writers and editors can’t freelance for media companies that have writers and editors on staff, musicians can’t fill in for orchestras, and per diem nurses can’t help out at hospitals during Covid-19 surges without first being reclassified as employees -- in this case for labor law.

The PRO Act would bring the ABC Test to the federal level for the first time. The legislation is the first step in President Biden’s plan to “establish a federal standard modeled on the ABC test for all labor, employment, and tax laws.”

Proponents claim that the PRO Act applies the ABC Test solely for the purposes of organizing unions. That means that if a group of independent contractors wanted to form or join a union at one of their client sites, they could do so. Or if enough others voted to form a union, any independent contractor who wanted to work with the company would have to join too and be bound by union-negotiated rates and terms. PRO Act supporters insist that it is not the same legislation as AB5, and that it will not reclassify freelancers as traditional employees.

But the PRO Act’s lead sponsor, Senator Patty Murray (D-WA), introduced a second bill that would affect employment law. That bill is called the Worker Flexibility and Small Business Protection Act, and it also contains the ABC Test. It’s the second step in President Biden’s plan to make the ABC Test the basis for all labor, employment, and tax law.

What does this mean for freelancers? At best, mass confusion. Labor lawyers and tax experts speculate that if passed, the PRO Act would clash with existing laws, requiring years of court cases to sort it out. Meanwhile, companies may continue to blacklist freelancers to avoid uncertainty and fines.

Are there any potential workarounds?

There has been a lot of confusion around whether a freelancer can simply form an LLC or S Corp to avoid reclassification as an employee, but nothing in the PRO Act exempts such business entities. When applied, the ABC Test could mean that a freelancer has dozens of “employers” instead of dozens of clients.

This is not what most freelancers want. Three quarters of independent contractors wish to remain so. We report earning as much as or more than we would in traditional jobs, and we’re happier. The flexibility of being your own boss helps parents and other caregivers and those with chronic illnesses or disabilities to work on their own schedules and terms. Even during the pandemic, 60% of independent contractors said that no amount of money would persuade them to return to traditional employment.

Sixty percent of independent contractors said that no amount of money would persuade them to return to traditional employment.

The PRO Act passed the U.S. House of Representatives in February 2020, before dying in the Senate last year. Now, under a new Congress, the bill passed the House again in March 2021, and is currently under consideration in the Senate Health, Education, Labor & Pensions Committee. Recently, President Biden called for the PRO Act to be passed as part of his American Jobs Plan, a sweeping infrastructure bill.

One suggested amendment to the PRO Act is to swap out the ABC Test for the IRS Common Law Test, which uses more nuanced criteria for determining whether a person is an independent contractor or an employee. It is more favorable for allowing freelancers to remain freelancers.

What should freelancers do now? Contact their congressional representatives and senators to explain how ABC Test-based laws could affect your livelihood. Offer alternatives, such as the IRS Test. Or use the power of the pen: Write op-eds and letters to the editor in your area about why lawmakers need to remove the ABC Test from the PRO Act. 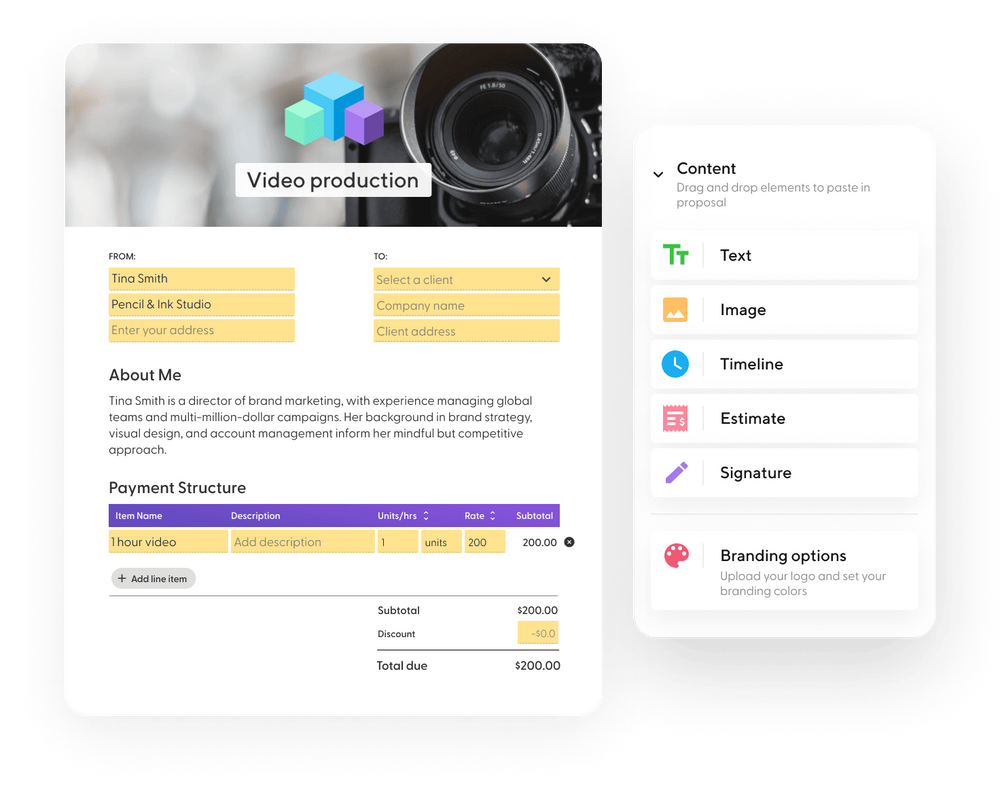 Need a proposal for a potential client?

Create a professional proposal in minutes with Indy’s Proposals tool. Use your logo and branding, add terms, and include portfolio items.

Jen Singer is a freelance writer and a co-founder of Fight for Freelancers, a nonpartisan, grassroots, self-funded, volunteer organization for independent contractors who oppose ABC Test-based laws.