What Is a Model Release Form (and Why Does It Matter)? Recently, music fans around the world were shocked to hear that the baby featured on Nirvana's famous 'Nevermind' album was suing the band. As bizarre as it may sound, a photo of a person should never be used without a contract being in place.

According to the claimant, his parents never signed a model release form or contract, which means the photographer did not have the right to use the photo for commercial or promotional purposes.

While your subjects may never make the cover of a best-selling album (hopefully they do, though), it is essential to always have a signed agreement in place with your models, even if you are just doing street photography.

This article will detail model and photo release forms, what they should say, and how to create them. Let's start with what a model release form is and how the law can protect photographers and their subjects:

What Is a Model Release Form?

If you are a photographer working with human subjects for commercial purposes, you have to protect yourself and your body of work by securing the appropriate release forms.

A photography model release form is a written document outlining the conditions granting an individual's image for commercial use, signed by the subject. Model release forms are meant to protect both parties.

The model is protected by providing agreed upon, defined terms of the photography session. The photographer, on the other hand, is granted legal permission to use the model's image and license the commercially created content.

It's important to note that minors (i.e., under eighteen) cannot sign release forms or any type of contract. This requires a rent or legal guardian to sign on their behalf. This is why the baby's parents could sue the band and create that crazy news story.

A model release form is a legal document, so it must contain the proper phrasing and content to avoid its legality being questioned. It's like any other contract. The difference is, it's all about who's in the photo and what it will be used for.

Suppose an industry-standard model release form isn't in place. The model can demand its removal, appeal for financial compensation for damages through the court, or even press criminal charges against the photographer. Every professional photographer should keep this in the back of their mind to avoid major losses.

Why Are Model Releases So Important?

Legally, every individual has a right to privacy (and publicity). That means everyone has control over the circulation of their personal information and likeness. This includes any photo or video in which they appear and can be identified.

If an image is circulated without permission for commercial use, it's considered a violation of their privacy rights. This is where people can sue and claim damages.

Experts may differ on what constitutes commercial use. For example, photographs published in a newspaper, educational books, or trade magazines are considered editorial use (also known as fair usage). Social media generally doesn't count unless the photos are used for advertising purposes. However, they become commercial if the same photos are used in a company newsletter or a business website.

Laws regarding photos and release forms also vary from state to state. That said, use this handy online guide when you want to make sure you are compliant with the regulations in your state.

You may also use photos taken in a public space without a model release. However, you can only do this when the people featured in the image aren't identifiable. If you focus on someone's face as the image's main subject, you will require a release. What makes someone identifiable is also up for debate. Tattoos, silhouettes, uniforms, or even someone's location can make them identified.

In every case, by asking your subjects to sign a simple release, you eliminate all confusion and future issues.

What Should Your Release Form Say?

Your model release should make it clear that (as the photographer) or a third party (if you are shooting for a client), you have legal rights over the images taken. The subject relinquishes their right over how, where, and when these images can be used.

For a commercial or commissioned shoot, the model release must detail the intended use, or where the photographs can be used, like on a website, social media, print advertising, and billboards, and in which ways (e.g., promotional purposes, endorsement, etc.).

The model release should also outline exactly how the featured model will be compensated for waiving their rights over their images.

In short, it should be clear to all parties what they agree to when they sign. In other words, it's a two-way street. Just be cautious: some states might have additional disclaimers and requirements.

You can download a basic photography template online and make additions to it to ensure you are covered. Your release form looks after the interests of all parties, so the ideal release will make everyone involved feel at ease and secure.

And, if you're ever unsure, always consult a licensed attorney to help with your model release form template.

What Is the Difference Between a Photo and a Model Release Form?

As a professional photographer, you will need more than just a model release form to conduct your business, including photo releases. In fact, the two are very different. 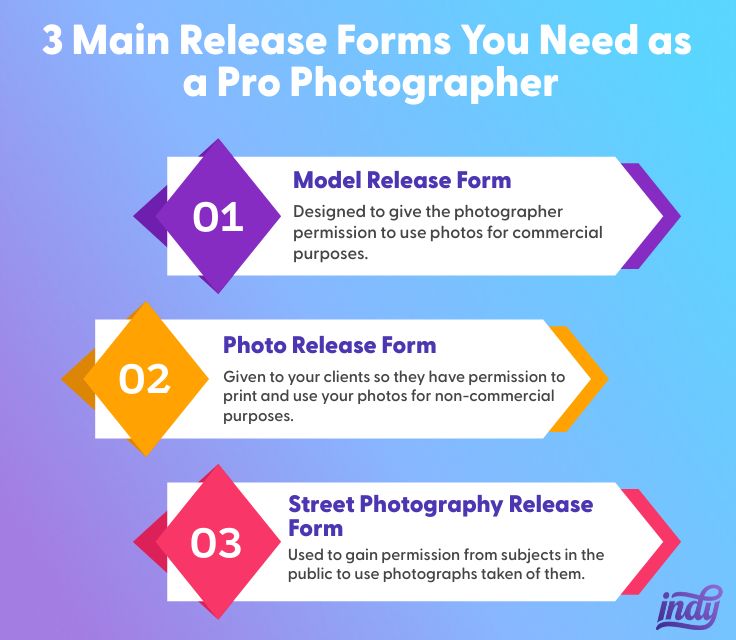 On the other hand, when it comes to the photo release document, the photographer signs it and gives it to a single client to print copies of the work. The photo release form concerns personal portraits, wedding photos, corporate headshots, and similar work the client may wish to use or duplicate.

What Street Photography Release Forms Do I Need?

As photo blogs like Humans of New York became more popular, a slew of photographers hit the streets and took shots of ordinary people in public places. The beauty of street photography is that privacy cannot be guaranteed to anyone in a public space, and there are special considerations in place for taking photos in these spaces.

If you photographed a group of people in a public setting, this form needs to be signed by the identifiable individuals in the picture. An identifiable person can be identified due to their appearance, dress, tattoos, or other distinguishing features, and they can argue any number of features in court.

Moreover, private events happening in public view (for example, weddings, funerals, birthday parties) have an implied right to privacy, so you may not take photographs without permission.

Remember: Using the picture for anything that can be considered defamatory, scandalous, harmful, or in any way that could be regarded as a false portrayal can turn you into a subject of a lawsuit if you don't have a proper release form in place. So make sure to draft a contract before moving forward.

How to Administer Your Model Release Forms

Now you have a better understanding of how to draft the various contracts between you and your subjects. We can look at the admin requirements: 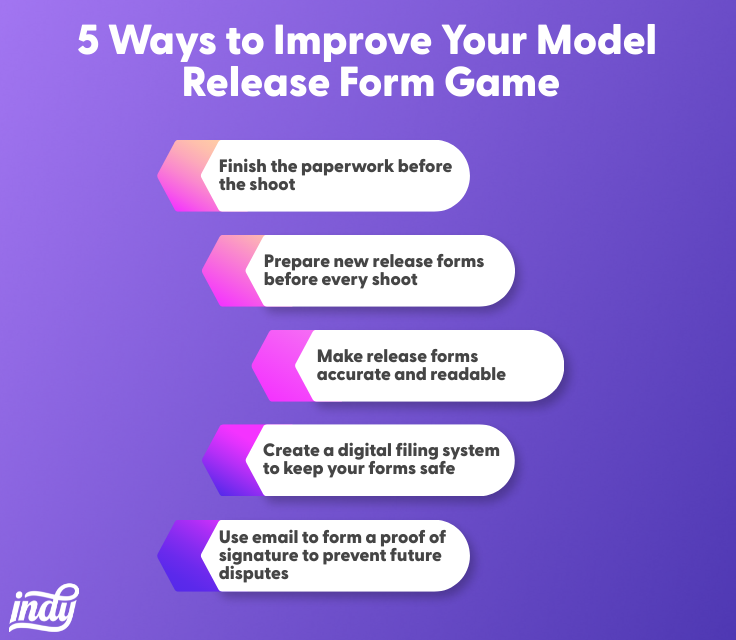 Have Your Paperwork Ready From The Start

If you plan a big shoot in your studio, ensure your models sign the release forms before they even go into make-up. If a model refuses to sign after a shoot, you've lost all of your work. You will have to present a signed form when you want to use or sell the images, so there is no way of working around it. Some individuals may not be comfortable signing a release.

Often, models are unsure of how and where photos will be used. In that case, your form needs to state that you can use it anywhere, at any time, for any purpose. Understandably, some models will be hesitant to sign. Make sure they understand precisely what you are asking of them to avoid release from disputes on the day of the shoot.

It's also a good idea to have a few model release copies on hand at all times in case someone needs to start over or if you run into an impromptu opportunity for a shoot.

Have Model Releases Ready For Each Shoot

Every new photoshoot requires a new release form, even if you are repeatedly photographing the same models. (Yes, it may be annoying, but it prevents future issues). It's common to reshoot the same subjects, but each project will require new paperwork.

Ensure Documents Are Accurate and Readable

The legal wording is important, but so is how the information is captured. Ensure your physical paperwork is legible in font size and print quality, and the models' details are correct and accurate.

Check that your models have signed each required field on the photography model release form. Capture as many contact details as possible since phone numbers and emails can change without prior notice.

Don't leave model release forms in a briefcase or filing cabinet indefinitely. Many photographers make the mistake of misplacing photography contracts because they believe that it’s a done deal once it's signed.

Your release forms should be labeled clearly and stored securely. Use a scanner or smartphone to scan your completed release forms and back them up in the cloud. You should save your documents alongside your proofs to find them easily. In case of a dispute, retain all copies indefinitely.

Use Email To Create Electronic Proof of the Agreement

When your model has signed the photo release form, countersign, scan, and email the copy to the model and the client. That creates a legal record and email trail that will provide necessary proof (as well as an additional backup) in the event of a dispute or hardware failure.

​​We've already mentioned cloud storage as a solution. In general, it's a good idea to store all associated model release paperwork in the same place. Multiple dropboxes, hard drives, and other storage platforms can be confusing, especially if you have to find a release form for a shoot you completed years ago. Small business project management platform Indy has online file storage capabilities, enabling you to store documents, share proposals and files, and create task lists easily.

You probably don't want to spend too much time or energy worrying about legalities and paperwork as a creative. But the consequences of violating copyright can include expensive lawsuits and reputational damage. Make sure you cover all your bases by using correct photo release forms to avoid this.

In fact, these release forms should become a part of your routine so you can focus on what matters most: Growing your portfolio and business.

Indy is the project management tool of choice for thousands of creatives. Create and send invoices, set up tasks, and find templates for your all-important releases and other contracts in a single platform. Create your own contract template or use one of the pre-made Indy contract templates to protect your brand.

Sign up for our free trial and take your photography business to the next level.